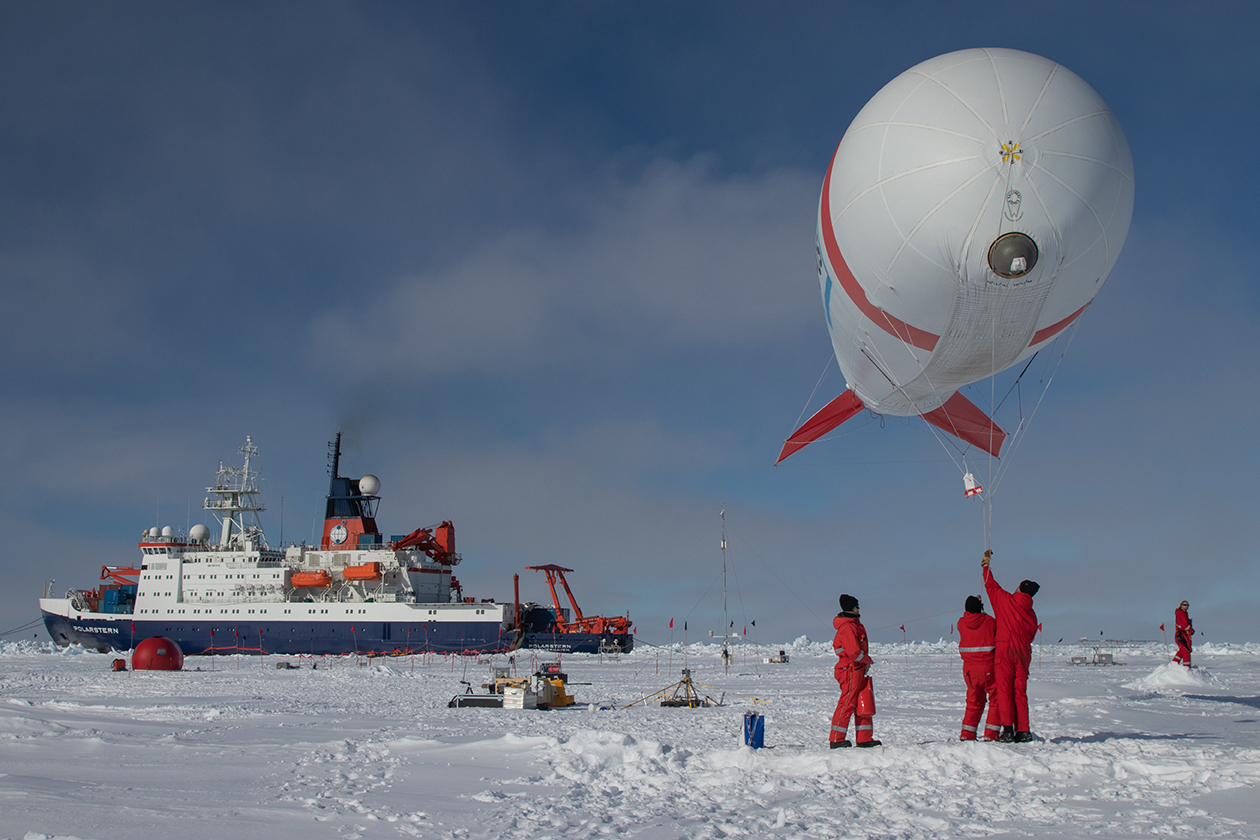 Nowhere else on our planet are the effects of climate change as massive or clearly visible as in the Arctic. Understanding these effects is the driving goal behind the measurements that were taken during the MOSAiC expedition. A large percentage of them were taken in the atmosphere, and covered the entire range, from down at the ice’s surface to the upper reaches of the stratosphere, 35 kilometres higher.

The researchers particularly focussed on very small-scale local processes at the surface of the ice and ocean, on the characteristics of Arctic clouds, and on how different types of clouds affect sunlight and emit their own thermal radiation. They also investigated snowfall from the clouds, how snow forms to begin with, and what these aspects have to do with the minute aerosol particles and droplets that float through the Arctic atmosphere.

Temperatures down to minus 45 degrees Celsius in the atmosphere, and below it, the much warmer ocean at a mere minus 1.5 degrees Celsius – you could say that the Arctic Ocean is like an underfloor heating system for the Arctic atmosphere, with only a thin layer of ice separating the two. The result: whenever a small crack forms in the ice, large quantities of heat and water vapour penetrate deep into the atmosphere, warming it. And thanks to climate change, these cracks are forming much more frequently. Moreover, the water vapour escaping through the cracks causes clouds to form, which in turn dramatically change the Arctic’s heat balance. Whether they have a warming or cooling effect depends on the elevation and characteristics of the respective cloud. But do these clouds chiefly consist e.g. of ice crystals or, despite the bone-chilling temperatures in the Central Arctic, of liquid water droplets? We still don’t know for certain, but MOSAiC will find the answer. 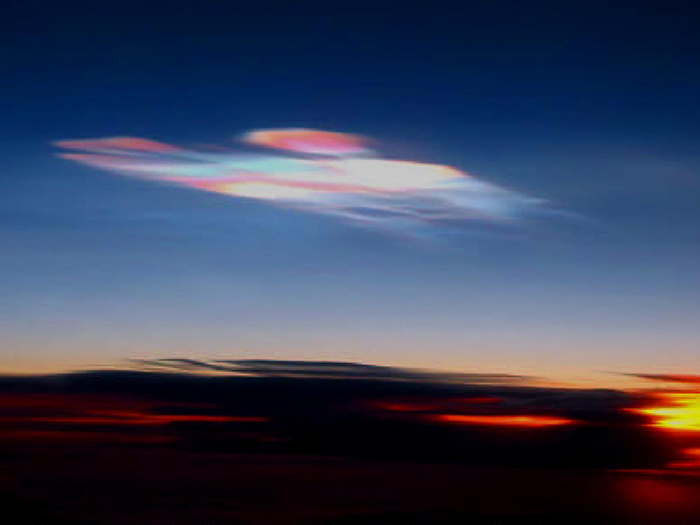 Exploring the clouds of the Central Arctic was one of the main focus areas for the Atmosphere Team on the MOSAiC expedition. The researchers aimed a veritable arsenal of advanced instruments at the Arctic clouds. Radar pulses and laser beams were shot into the clouds and the reflected signals analysed, batteries of radiation-measuring devices recorded the heat emitted by the clouds and how they scatter sunlight, while other instruments analysed the clouds directly with the aid of helium-filled balloons, drones, helicopters and aeroplanes.

In this regard, the researchers were particularly interested in e.g. what are known as mixed-phase clouds, which consist of both ice crystals and water droplets. This type of cloud produces snow, while the layer of snow on its surface insulates sea ice from the frigid air and prevents the ice from growing thicker by freezing more ocean water.

The result: Arctic sea ice covered by snow is thinner. Precipitation measurements offered the MOSAiC Atmosphere Team insights into the daily and annual development of snow cover in the Arctic, and its influence on the sea ice’s energy balance.

Cracks in the ice 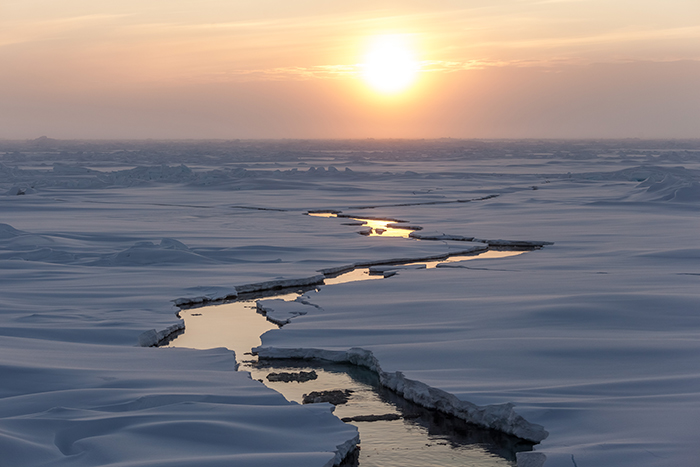 The insulating ice cover is repeatedly broken up by drift, especially when storms rage over the ice. The MOSAiC experts payed special attention to these channels of open water because, even if these scattered cracks might seem negligible on the scale of the overall Arctic system, taken together they can allow substantial quantities of heat and moisture to escape into the atmosphere: an important effect that is not sufficiently reflected in climate models. One of the MOSAiC Atmosphere Team’s objectives is to arrive at a better understanding of the processes at work in and above these channels, so that they can be integrated into future climate models.

Aerosols and the Arctic climate 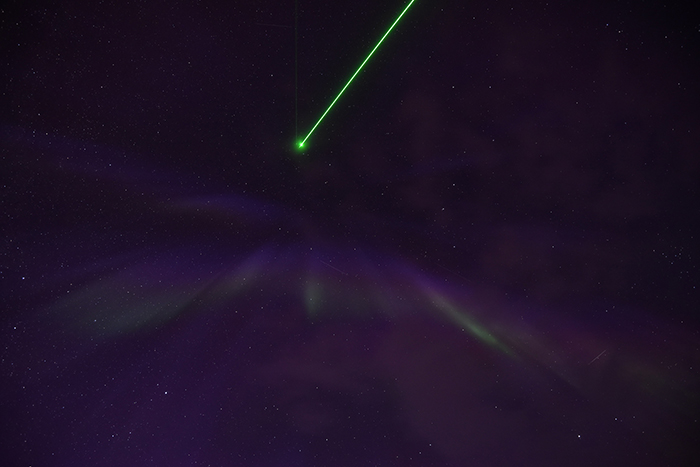 Whether moisture condenses to form clouds, and whether water droplets in the clouds then freeze into snowflakes, depends in part on whether the air contains certain particles referred to as aerosols. Water vapour condenses easily on these aerosols, which can also make water droplets freeze. Consequently, aerosols have a major influence on clouds, which makes them an important factor in the Arctic heat balance. However, what we know about aerosols in the Central Arctic, especially in winter, is extremely limited. MOSAiC addresses a host of open questions, e.g. on aerosol sources, their composition and interactions with clouds and raditation, in detail.

In this regard, MOSAiC’s interdisciplinary focus also was on an important substance for aerosols in the Central Arctic – dimethyl sulfide, a gas produced by metabolic processes in algae and other marine microorganisms, and which, in complex chemical processes in the atmosphere, forms aerosols. Though aerosols have recently made headlines as ‘climate-relevant substances’, especially in the Arctic context there’s still a great deal that we don’t know about them.

Conducting research on the ground and in the air 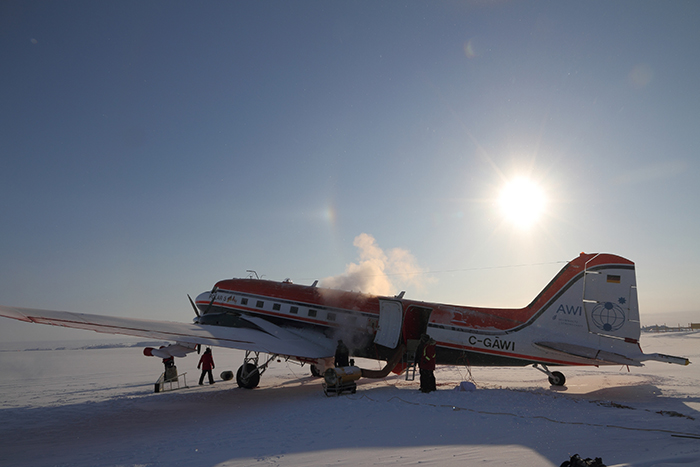 In the course of the expedition, the atmospheric researchers were faced with the challenge of measuring and monitoring the sea ice throughout its entire annual cycle. Fortunately, the team had access to an array of monitoring stations, automated weather stations, and precipitation-measuring equipment in the central observatory on board Polarstern and in the ice camp, especially in Met City: the ‘neighbourhood’ of the ice camp that was furthest from the ship, so as to avoid any contamination. Raman and Doppler lidar, microwave and infrared radiometers, not to mention the countless observation stations in the expansive distributed network, were used e.g. to record the most important thermodynamic parameters.

In addition, the atmospheric researchers sent up free-floating research balloons and tethered balloons, which, climbing up to two kilometres, allowed many atmospheric processes to be observed in high resolution. Lastly, the AWI’s polar research aircraft, helicopters and remote-controlled drones played an important part in atmospheric investigations throughout MOSAiC.