As soon as the Polarstern had dropped anchor at an ice floe, a small city appeared on the surface of the ice. Though the MOSAiC researchers didn’t live there, it is where they conducted much of their research.

And they did so using a carefully planned structure: just as blacksmiths, potters and other artisans each had their own district back in the Middle Ages, in the ‘Ice Camp’ meteorologists and climate researchers, marine biologists and specialists for snow, sea ice and other disciplines worked together in smaller camps of their own, which were also home to the specific equipment they needed.

The German research icebreaker Polarstern was the home of all MOSAiC participants during the drift. Besides being the living and working platform, Polarstern served various other purposes, making it the central hub of MOSAiC:

- All laboratories, workshops, and offices were located on board

- The bridge and the crow’s nest served as observational platforms

- The helicopter deck served as hub for many flight operations

- Sample and cargo storage were centrally located on board 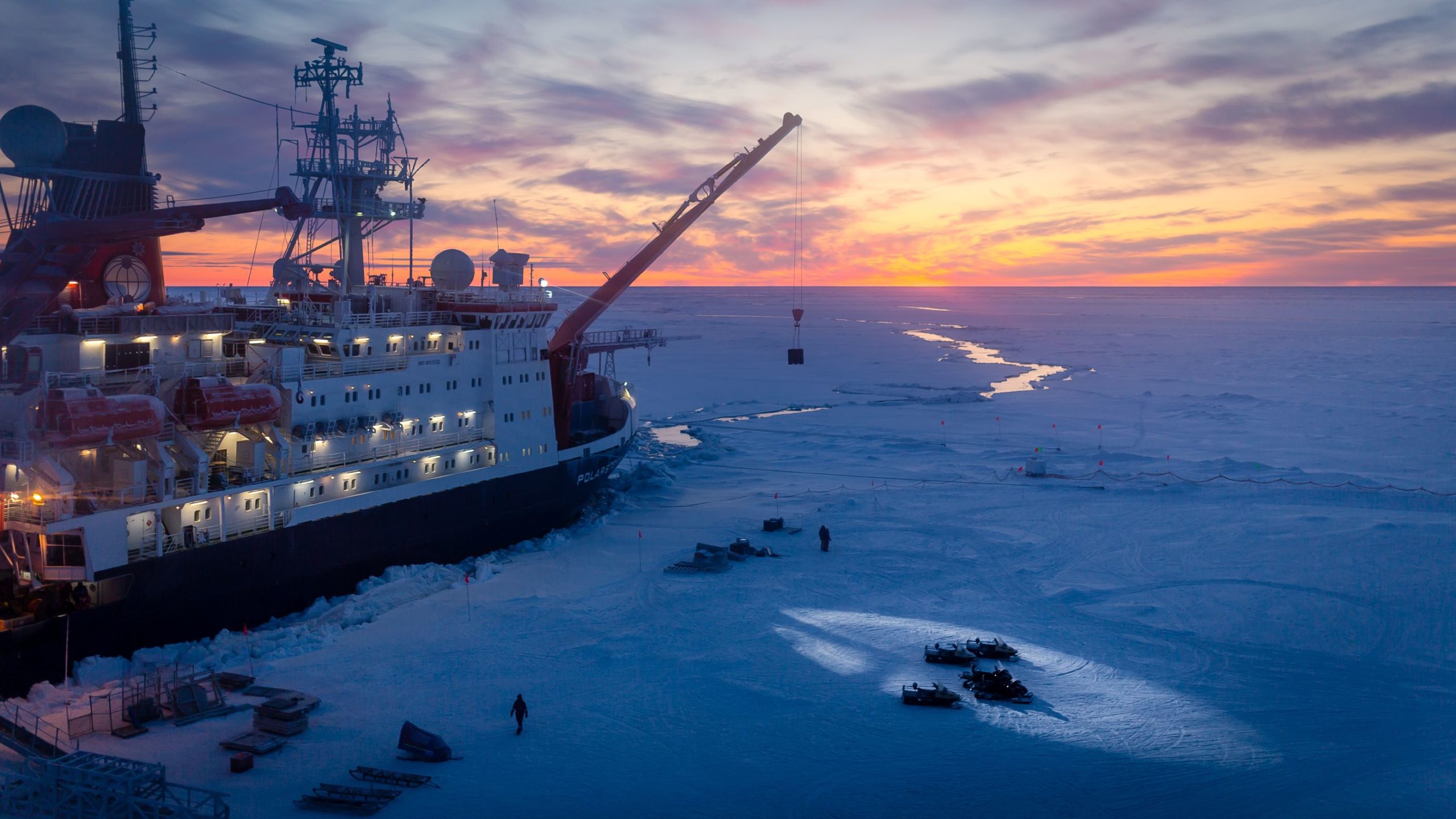 As a first preparatory step, the researchers set up the various stations of the Ice Camp, laying out a network of paths between them and installing power lines from the Polarstern to supply electricity to the stations as well as data cables to transfer all collected data back to the ship. Artificial lights are prone to influence the ecosystem both on and below the ice, which is illuminated only by the moon and the stars during the Polar Night. This is why researchers determined a large dark zone, in which they had to rely on infrared light exclusively to enable the observation of natural conditions with as little interference as possible. 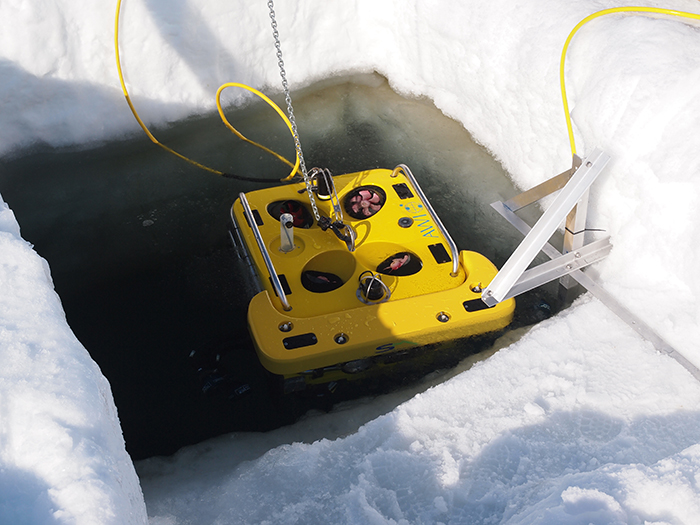 One research centre on the ice was called ‘ROV City’, which hosted a broad range of scientists from various disciplines, spanning from sea-ice researchers to marine biologists and oceanographers, and also served as the central platform for their measurements and dives. Of course, the researchers themselves didn’t dive under the ice. Instead, they used remote-controlled or ‘remotely operated vehicles’ (ROVs). These unmanned vehicles are box-shaped and measure ca. 80 X 80 centimetres. Thanks to a cable, they could transmit high-resolution video and a wealth of observational data back to the ice floe. Since ROVs are self-propelled, pilots can maneuver them to virtually anywhere they wish to explore. In many cases, they sweep vertically or horizontally along the ice margin, where they measure the characteristics of the water and ice.

In this way, marine and ice biologists were able to collect water samples, use the ROV’s cameras to observe organisms below the ice, or even employ nets to collect them for further study at the ice camp or on board the Polarstern. Whereas research ships most often rely on a multibeam echosounder to emit sound waves and use the reflected echoes to map the seafloor, ROVs send their sound waves upwards, allowing them to measure the contours and underside of the ice. This way, they share new images of the virtually unknown world below the ice of the Arctic Ocean with each dive. 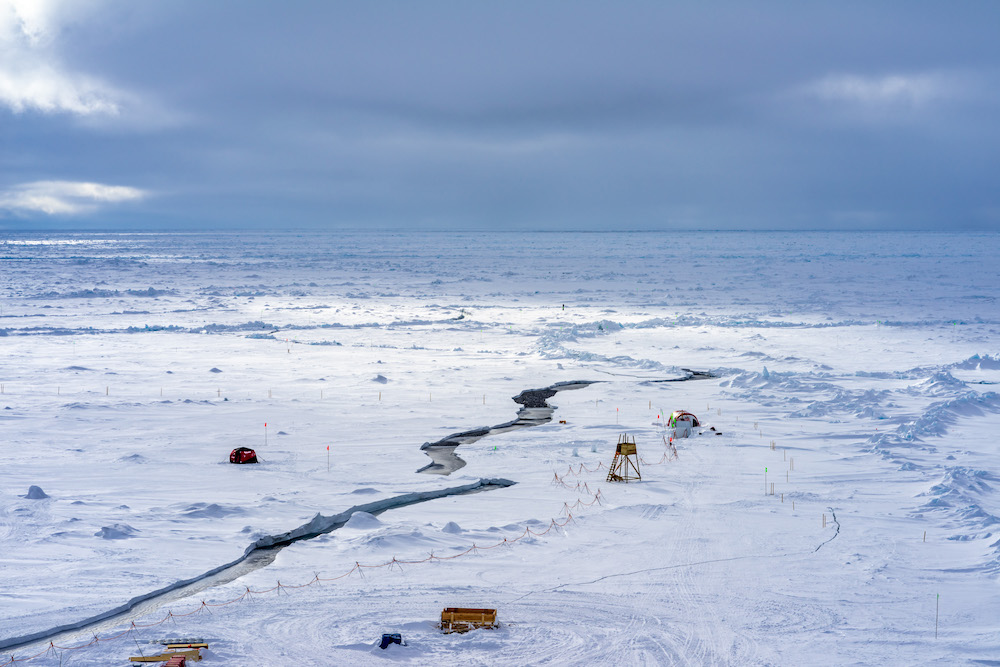 Most of the measurements and work of the sea ice team were performed within a few kilometres distance from the Ice Camp close to Polarstern. Sea ice and snow cover properties were observed with a huge variety of methods, covering and mapping the interfaces to the atmosphere and ocean as well as many snow and ice properties. Major efforts were made to include as many sea ice and snow cover conditions, ages, and features as possible in the surrounding area of the Ice Camp: new ice, refreezing of leads, deformed ice, weathering ice, and melting ice. A freezer lab container was used to process snow and sea ice samples throughout the year. 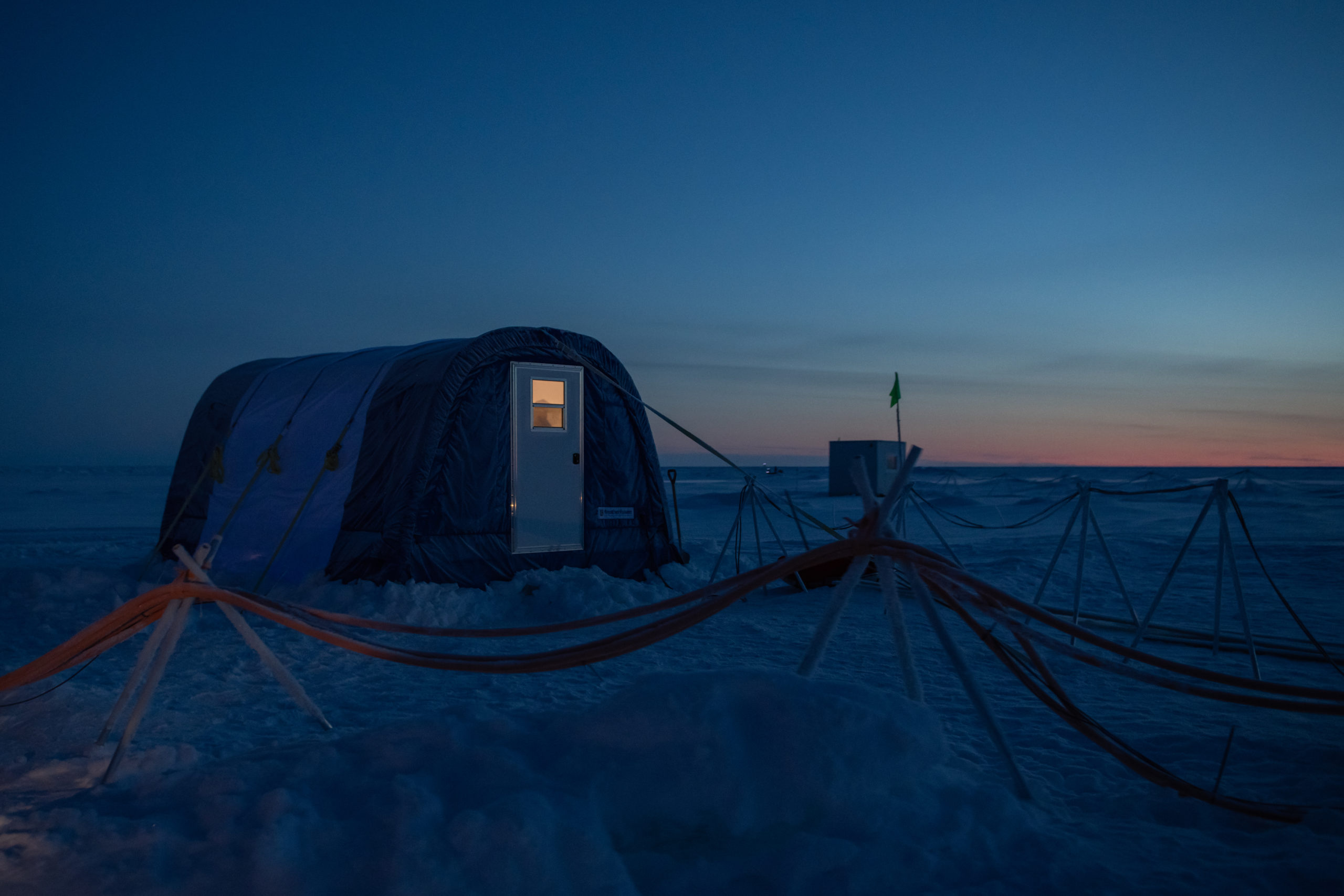 Ocean City was all about sea water research. Here, researchers could use a winch to lower their measuring equipment through a hole in the ice and into the water of the Arctic Ocean, and haul water samples from the ocean’s depths to the surface. To prevent the water from immediately freezing in the frigid air when it surfaces, the hole was surrounded by a several-metre-wide tent that was heated to a few degrees above zero.

On a clear day, Met City catched the eye thanks to its veritable ‘menagerie’ of sensor masts, which the meteorological researchers used to measure an extremely broad range of data, e.g. the physical state of the atmosphere, as well as energy, momentum and humidity fluxes. The atmospheric chemists also working there took a closer look at the composition of the air and fluxes of chemical species. Another tent served as a hangar for the tethered balloons that stood continuously at about 2 km altitude above the research camp. These balloons directly measured the atmospheric conditions in unprecedented vertical resolution as well as the composition of the atmosphere and aerosols. 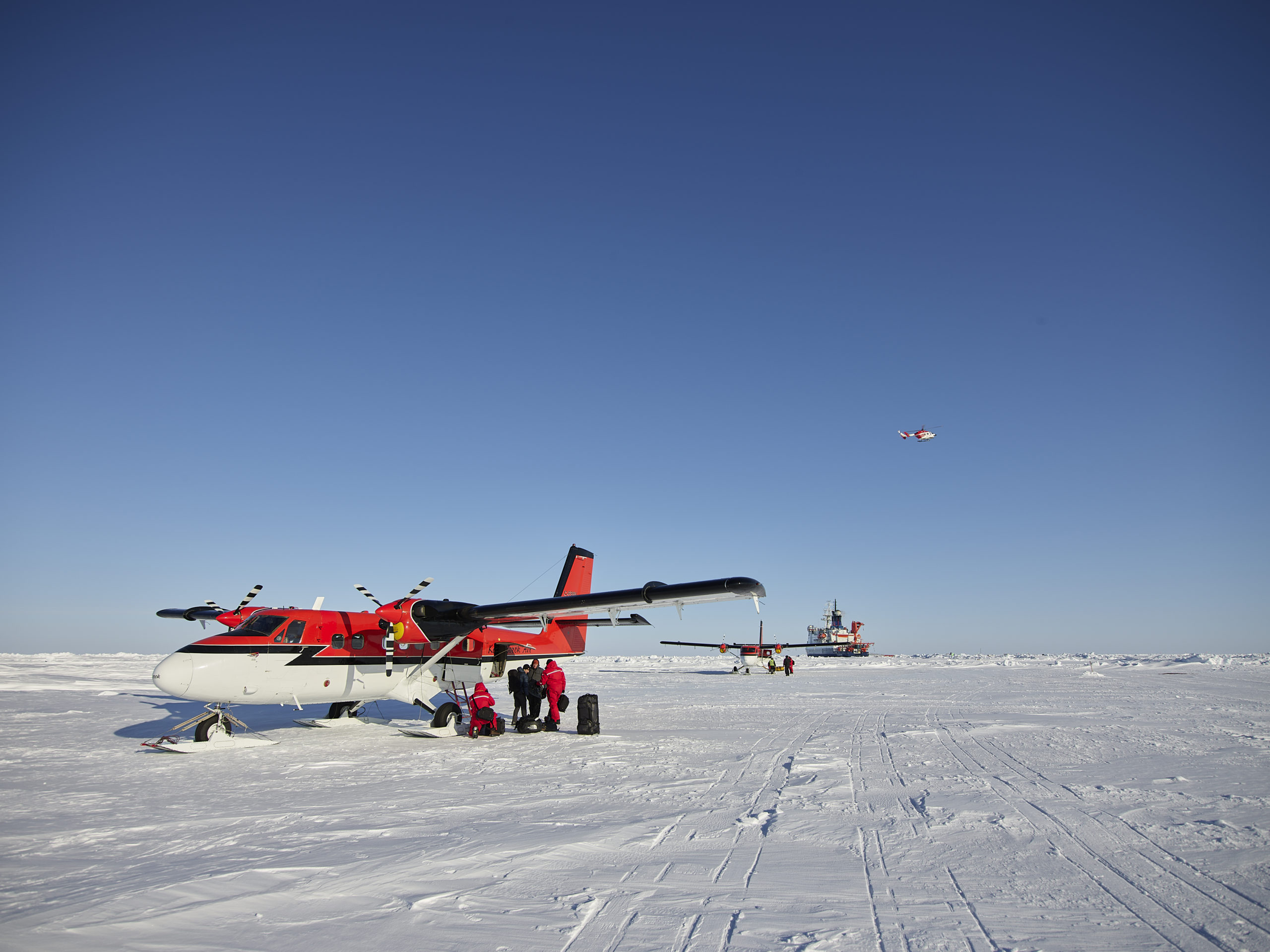 A runway, prepared on level sea ice by using a snow cat, enabled polar aircraft to take off and land. 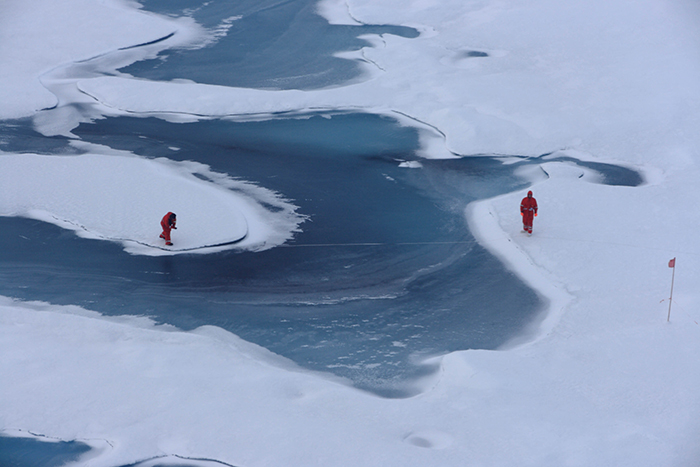 Day by day, new ice was forming, adding to the old ice floe the Polarstern was moored to. This resulted not only in the research vessel quickly becoming trapped, but also in the floe constantly expanding. Because this new ice was of particular interest to the MOSAiC researchers, they set up additional stations here to investigate conditions on and underneath the ice. Just like the old ice, these patches of ice that formed after the Polarstern’s arrival had working areas established on them in which the researchers collected or drilled out samples from the various layers of snow and ice once a week.

In addition, the researchers used drones packed with scientific instruments to expand the observational area beyond the central ice floe and also to collect samples from different atmospheric layers above the ice. These samples were then analysed on the Polarstern or, after the expedition, in the researchers’ home laboratories on land. However, all this data is of little use to the researchers unless they determine precisely where it was gathered. On an ice floe that is relatively solid, but nevertheless drifting on the Arctic Ocean, a satellite positioning system alone simply isn’t enough. This is why, at the very beginning, the MOSAiC researchers defined certain reference points on the ice which they used to project a virtual net with a 100-metre grid spacing over the old and, later, the new ice, allowing the locations of the individual measurements to be precisely determined. The coordinates of these points were continually verified via satellite positioning. Taken together, the two values show(ed) precisely where on the ice floe - and in fact on the planet - each measurement was taken. 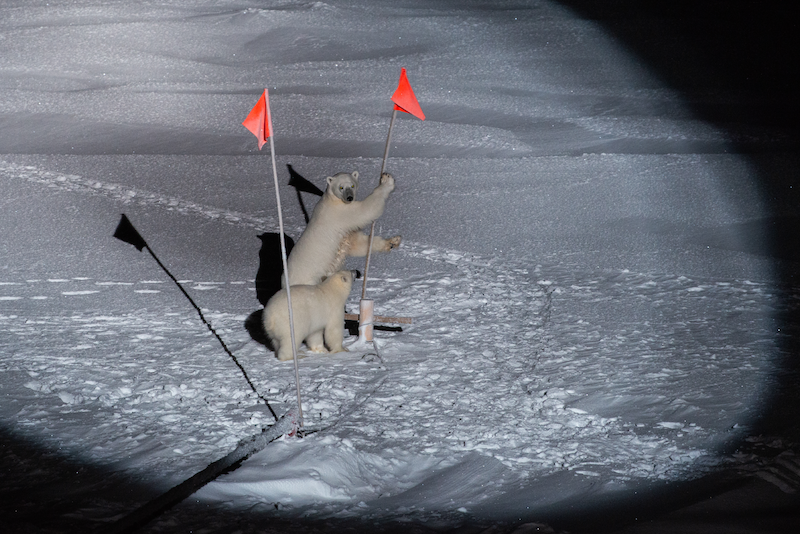 All research stations were located within a 700-metre radius of the Polarstern. To ensure that researchers can safely work there and use the rest area during one of their infrequent breaks, a 360-degree infrared scanner, mounted high on a mast on the Polarstern, constantly monitored the horizon and the entire Ice Camp. A lookout on the ship’s bridge kept a close eye on the readouts, and if he or she detected a polar bear approaching the central zone, all personnel at risk were immediately brought back on board to safety. In addition, tripwires had been installed all around the Ice Camp. If a polar bear stepped on one, it automatically set off a pyrotechnic device. Without harming the bear, the loud and unfamiliar sound is often enough to scare it off as experienced polar researchers know.

There were also several specially-trained polar bear protection staff on board the ship, three of which continually patrolled the ice, armed, during the team’s working hours on the ice. In addition, researchers leaving the central zone always carried firearms for their protection. Since 1980, when the Alfred Wegener Institute began its research activities, researchers have seen more and more polar bears on the ice of the Arctic Ocean. Despite those innumerable encounters, they have never had to shoot a single polar bear – a tradition the MOSAiC expedition continued.