Contrary to popular belief, the ice on the Arctic Ocean is hardly smooth and white, like an enormous ice skating rink. In some places, the winds and tides produce ice hummocks, which can extend ten metres below the surface, substantially influencing the currents below the white ice cover. Especially in the summer months July and August, channels of open water constantly form, some of which linger, while others quickly refreeze. During the summer, this open water absorbs heat and sunlight from the atmosphere, and heat and humidity from the ocean make it into the atmosphere. 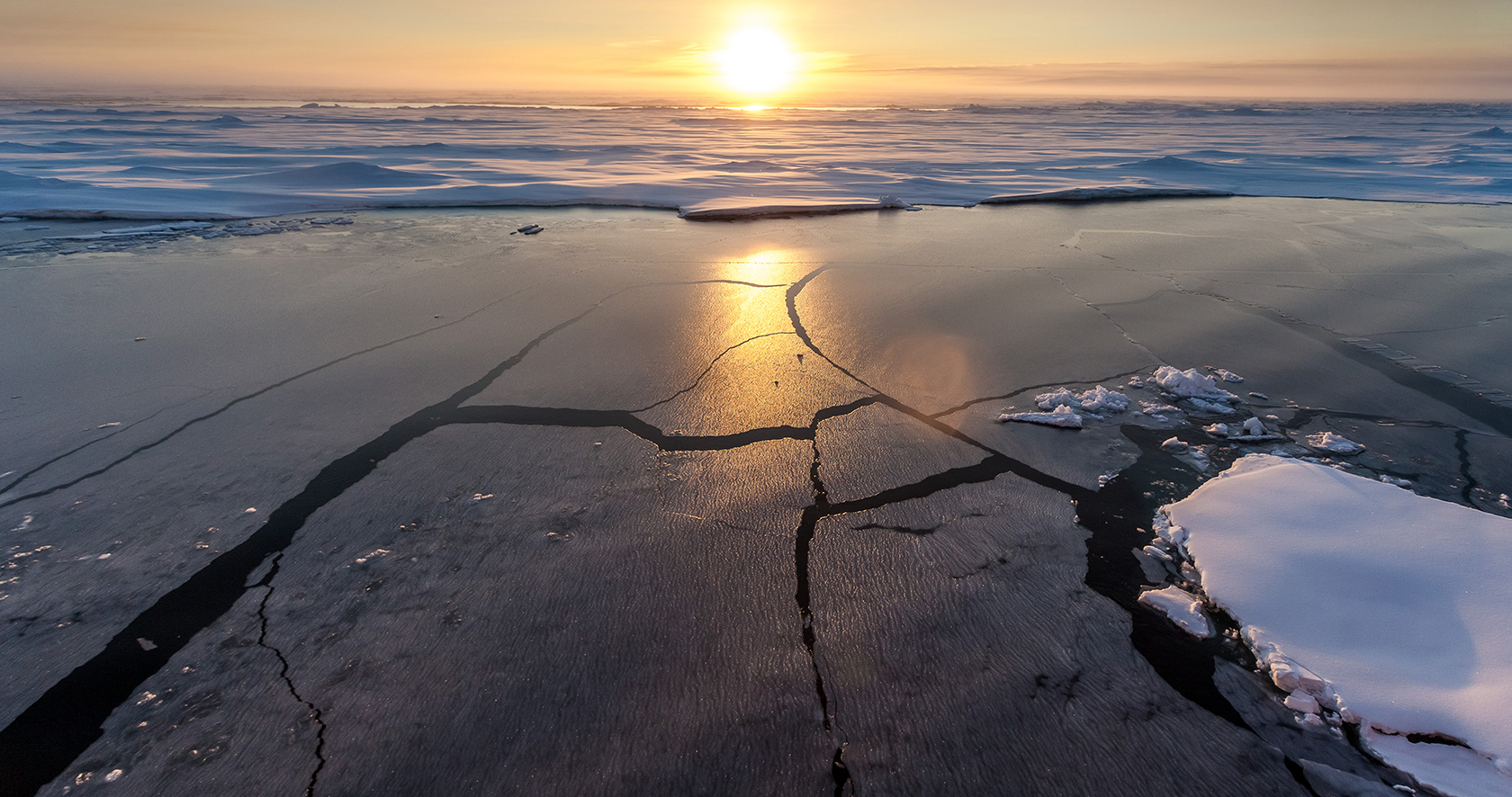 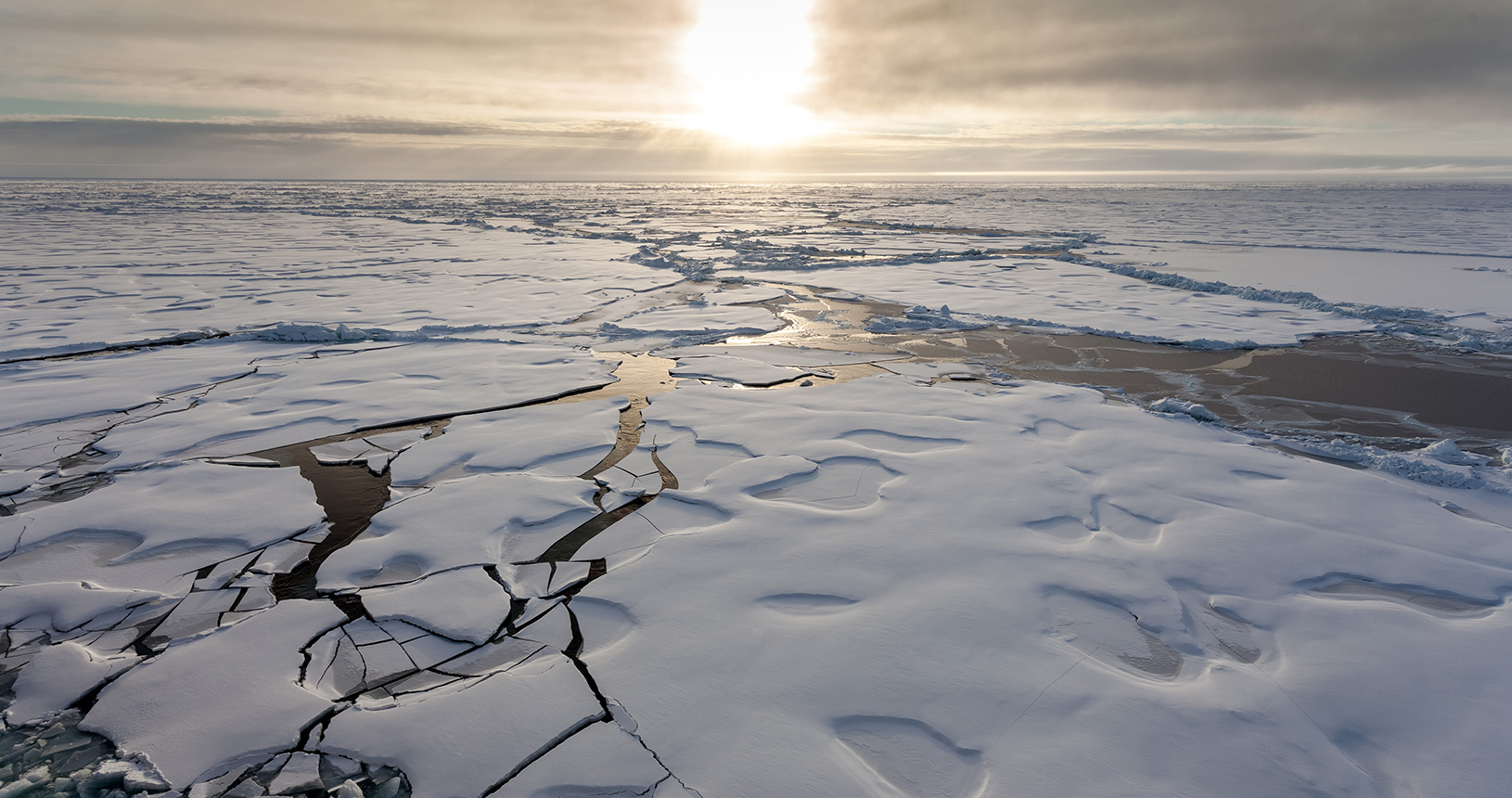 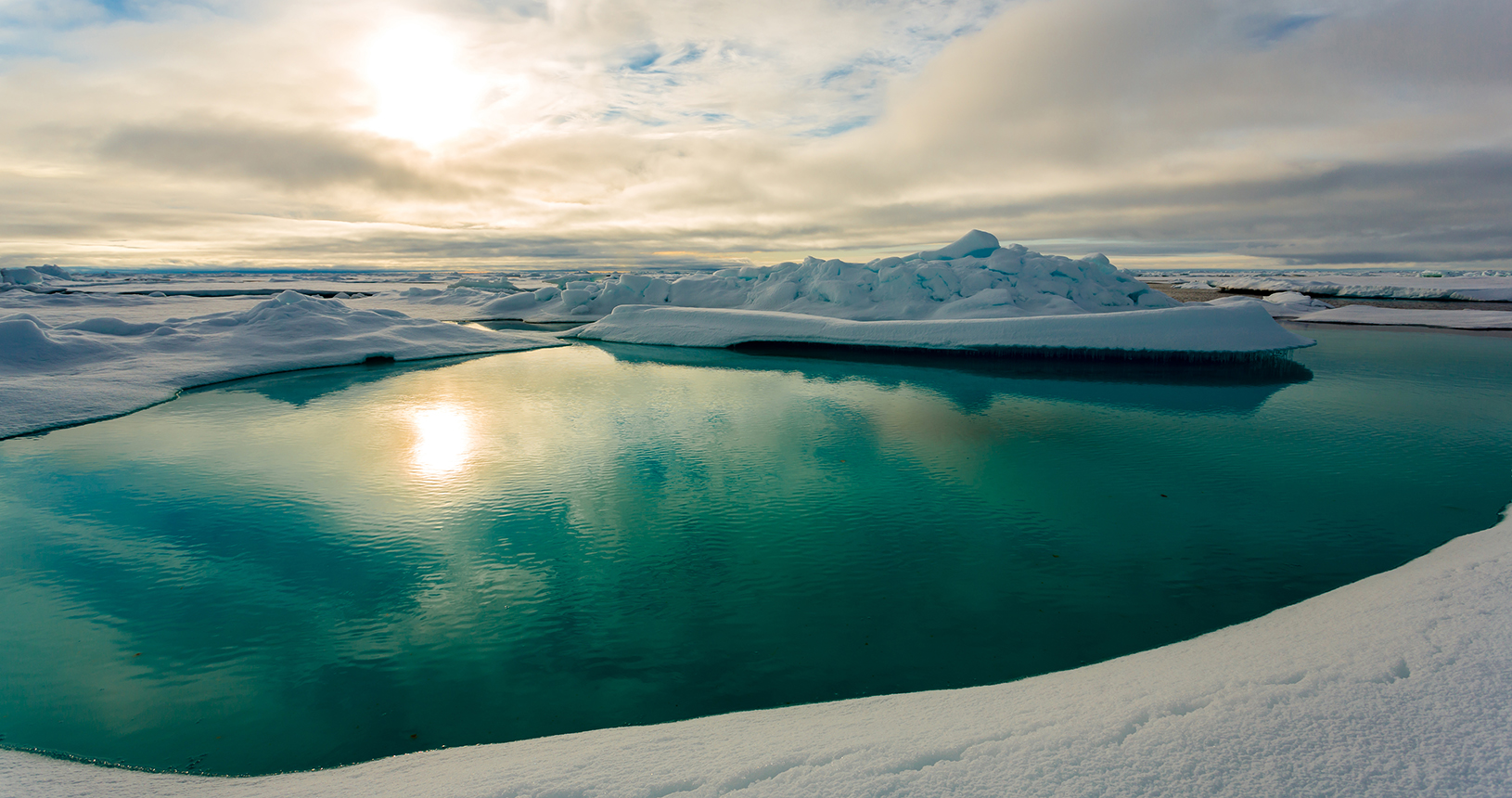 Accordingly, changes in the ice also have an effect on the ocean and the air above it – and therefore, on the weather. In order to observe these dynamic processes across a large area, the researchers devised a Distributed Network of measuring stations, which allowed them to continually and precisely monitor an area up to 50 kilometres from the Polarstern. At the start of the MOSAiC expedition, the participating researchers used the Polarstern as their base of operations for establishing the central research stations on the ice floe, while the Russian icebreaker Akademik Fedorov set about installing the measuring stations for the Distributed Network at remote locations on the ice.

Explore the MOSAiC ice camp in this virtual tour 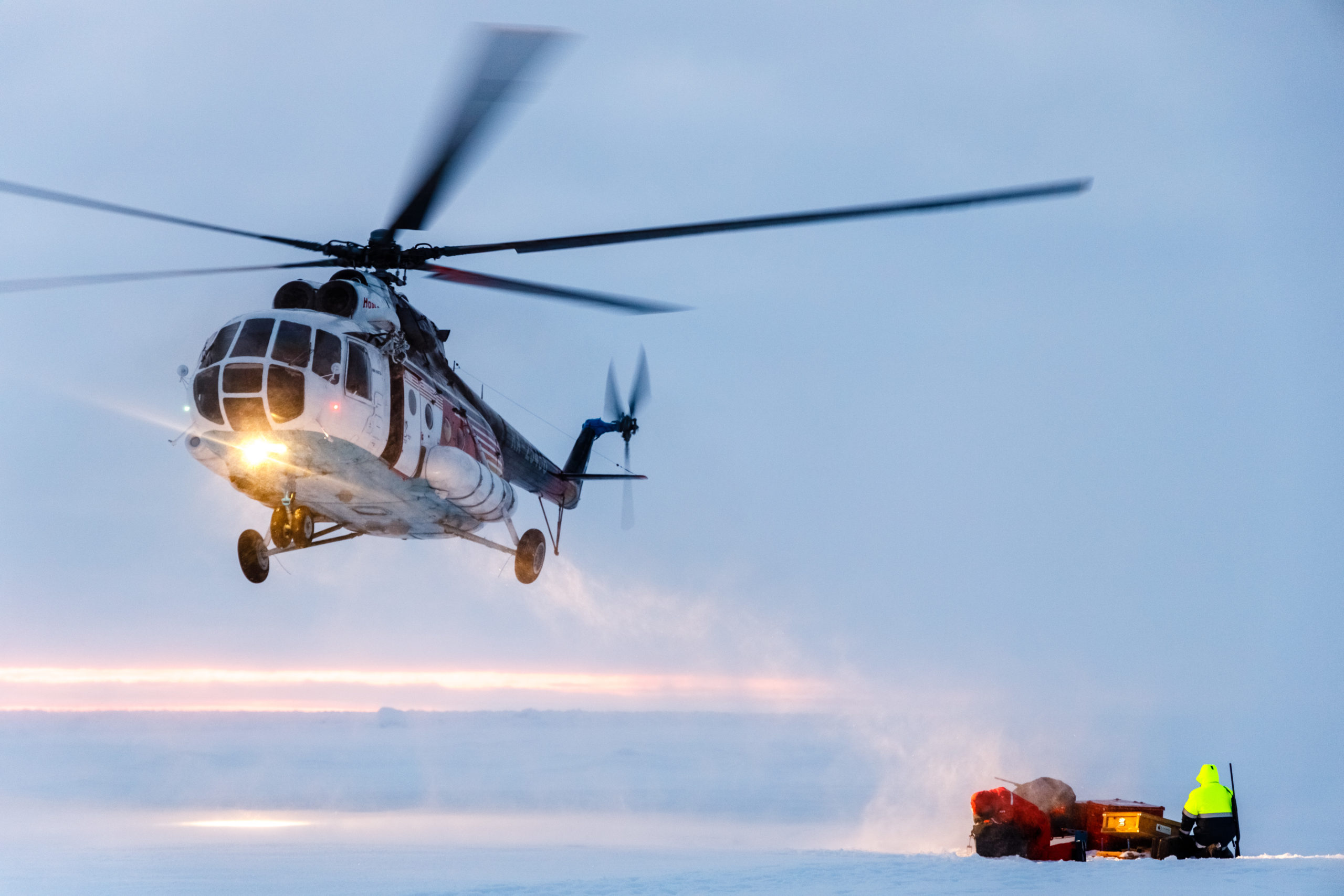 Some of the devices that constituted the Distributed Network use radio transmitters or satellite links to automatically report their current position, which allowed the researchers on board to determine where the transmitters were and how the floes below them were drifting. In the long term, these readings will provide a portrait of the movements and deformations of – and the winds and currents affecting – a large expanse of ice. Whereas the researchers only had to replace these position transponders in spring, during which they install some of them elsewhere, other stations in the Distributed Network needed a great deal more attention. Though they automatically and continually measured important parameters – e.g. air temperature, ice temperature, sunlight and snowfall – they required routine maintenance from time to time, during which e.g. their delicate sensors were cleaned and cleared of snow and ice. 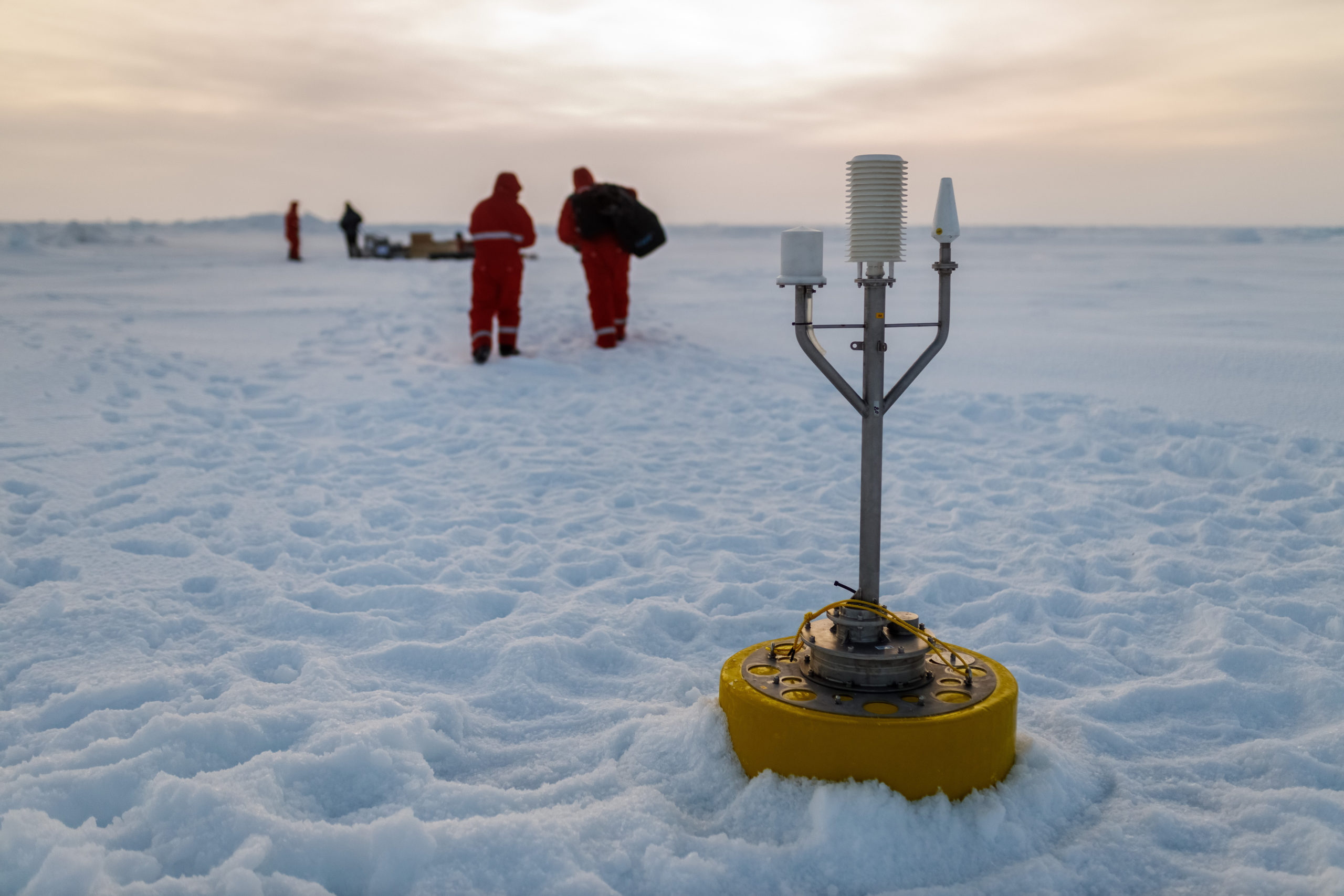 The devices in the Distributed Network served to record important meteorological factors, e.g. the atmospheric and surface (ice) temperature, as well as the wind, sunlight, thermal radiation, cloud cover, and amount of snow cover. Others monitored the situation in and especially below the ice: how cold is the water at various depths, how high is the salinity, and how much of the oxygen vital for fauna does it contain? How do these parameters change, what currents are present, and how much warmth, salt and oxygen do they transport? The better researchers understand these processes, the better they can also understand their influence on the conditions below and above the ice, and consequently on both short-term meteorological activity, and on long-term climate changes. 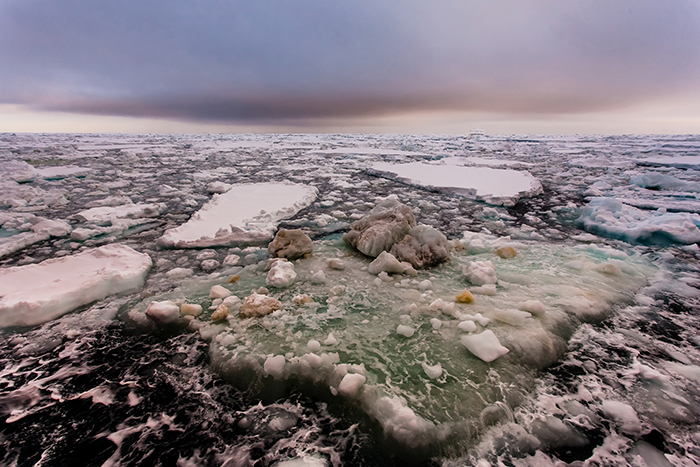 Some devices also observed the tiny organisms below the ice, which, similar to leaves and blades of grass on land, use the energy from sunlight, water and carbon dioxide from the air and ocean, plus a few other nutrients, to produce the building blocks of life. Accordingly, some of the machines measured how much light is available to these ‘phytoplankton’, while others automatically recorded the amount of chlorophyll. Because the amount of chlorophyll in the organisms can vary considerably, once a month the researchers used one of the Polarstern’s helicopters to fly out to their devices – or, if possible, went by snowmobile instead – and to collect water samples on site, allowing them to determine the number and types of organisms they contain. The results also helped them cross-check and fine-tune the data provided by the automatic devices. Other monitoring devices, too, had to be recalibrated every month or two. Though the process was less challenging, this usually had to be done in the middle of the long Polar Night, which meant the helicopter needed a clearly lit landing area. Accordingly, the devices in the network were also equipped with suitable lighting, which was switched on remotely by the helicopters when they approached. 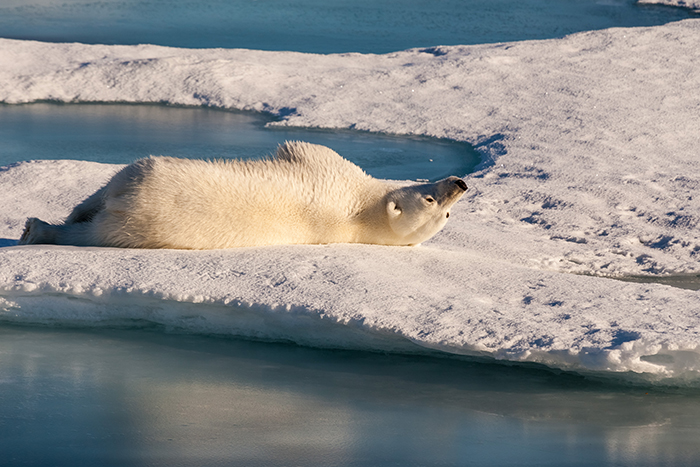 Another aspect to be kept in mind: the ice of the Arctic Ocean is home to countless polar bears, which can be extremely dangerous for human beings. Accordingly, whenever the researchers had to travel to their devices in the Distributed Network, one of their team was always appointed as a polar bear patrol. If a polar bear was detected in the area, the researchers vacated the danger zone.