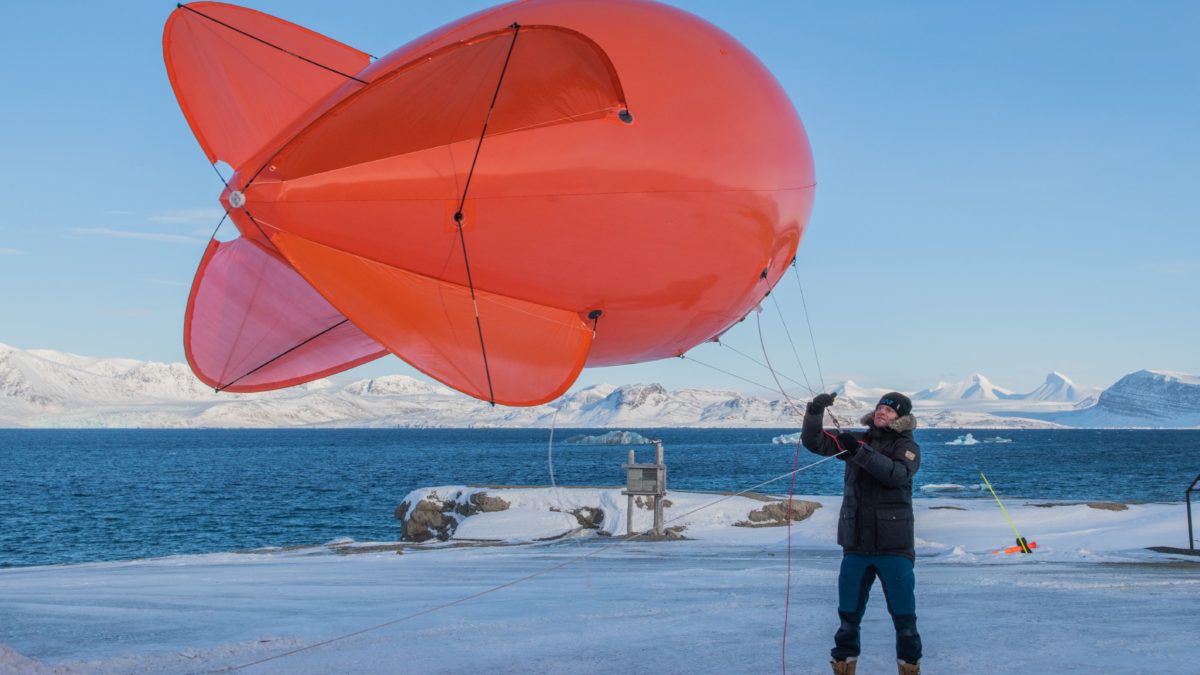 Markus Rex, expedition lead of MOSAiC, with a tethered balloon - 'Miss Piggy' during a MOSAiC field training in Ny-Alesund, Spring 2019. 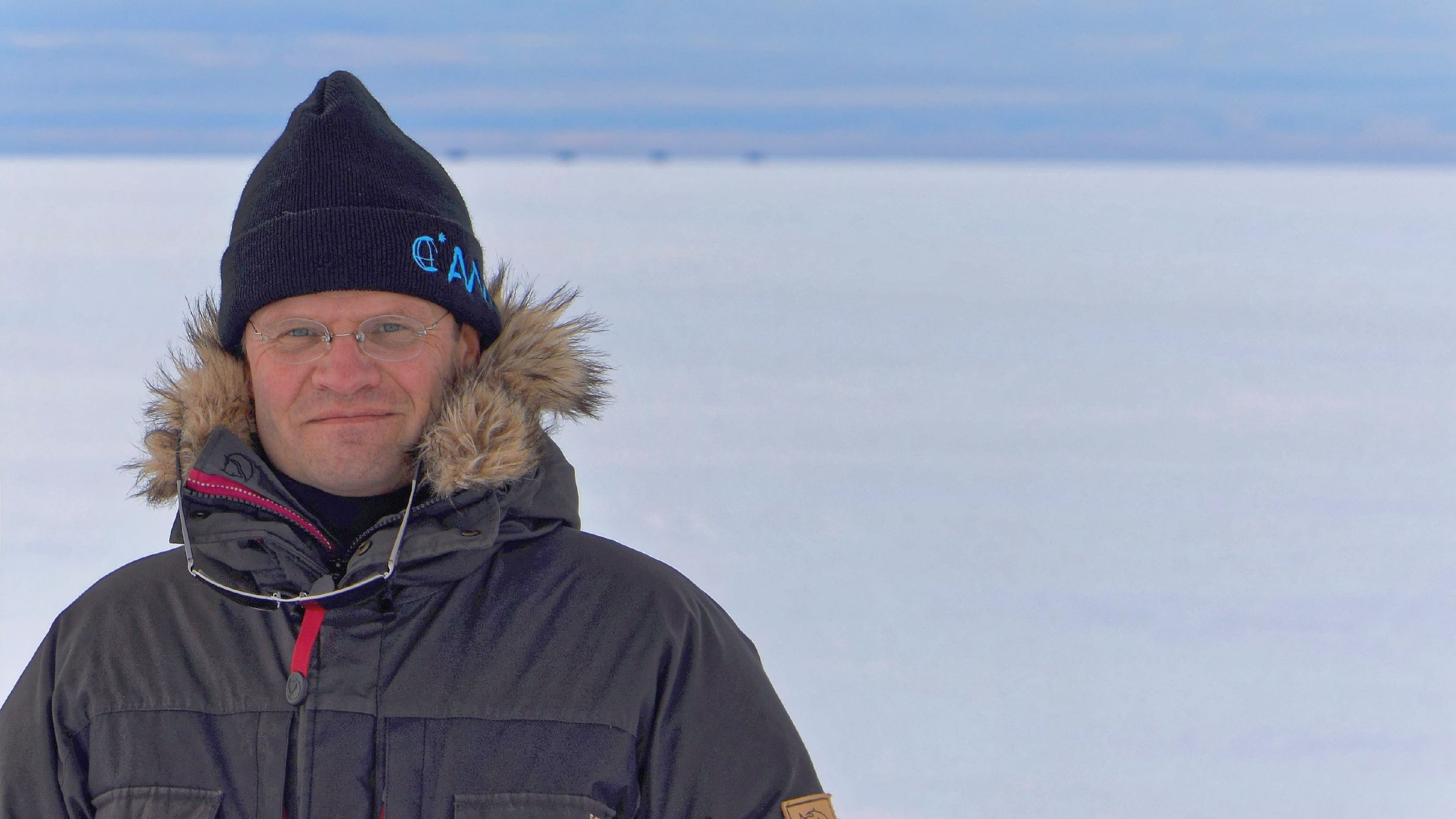 Starting in autumn 2019, the German research icebreaker Polarstern will drift through the Arctic Ocean for an entire year. During the MOSAiC expedition, experts from 17 nations will investigate the Central Arctic throughout the year. They will overwinter in a region that is virtually inaccessible in the long polar night. What moved them to take on this Herculean task?

We spoke with expedition head Markus Rex from the Alfred Wegener Institute.

Mr Rex, why are you and other researchers willing to become trapped in the ice of the Arctic Ocean for an entire year?

No other region of the Earth has warmed as rapidly over the past few decades as the Arctic; in essence, it is the epicentre of global warming. But at the same time, we still barely understand the region; in particular, the Central Arctic in winter remains virtually unknown. Accordingly, our goal is to comprehensively investigate, for the first time, local processes within the climate system.

What do you hope to accomplish?

The Arctic is closely linked to the weather in our latitudes. We can already see climate changes in the Arctic that are shaping our weather and climate. And at the beginning of this year we had an extreme case: it was actually warmer in the Central Arctic than in Germany. We won’t succeed in accurately forecasting climate developments if we don’t have reliable prognoses for the Arctic. As such, we need extensive field data that can only be gathered on site.

Aren’t previous expeditions enough? And why does it have to be a whole year?

When we think about the Arctic, we often picture the North Cape or Svalbard. We can easily reach both regions the whole year round, but they’re located comparatively far to the south. The MOSAiC expedition will take us to areas that are beyond anything we’ve ever seen before, because virtually no-one has ever visited them in winter. We’ll be north of the 80th parallel the entire time, and for much of it, we’ll even be in the direct vicinity of the North Pole, above the 87th parallel. That’s so far north that we’ll hardly see any polar lights, and in winter the ice is even too thick for an icebreaker – which makes drifting the only way to reach the Central Arctic then.

"We won’t succeed in accurately forecasting climate developments if we don’t have reliable prognoses for the Arctic."

Just like the Norwegian polar researcher Fridtjof Nansen did 125 years ago.

Exactly! Back then Nansen, in a spectacular and still visionary expedition, first attempted the ice-drift approach. It was a truly pioneering achievement; no-one before him had ever been so far north. But the scientific measurements were still very rudimentary; the instruments chiefly consisted of a thermometer and a few simple measuring devices – which were the top of the line back then, but are a far cry from being able to deliver the detailed observations of climate processes that we need, and which we already have for other parts of the world. For the first time, we’ll repeat his expedition with a large and well-equipped research vessel. From the heart of the Central Arctic, we’ll be using the world’s top measuring and monitor systems. This will finally allow us to study the environmental processes in this remote region in detail. What we can already safely say is that we’ll find higher temperatures and less ice than Nansen did.

What will the different phases of the expedition look like?

In the Central Arctic there’s only the ocean, which is covered by a sheet of ice. And it’s that force of nature – the ice sheet – that will determine the course of our expedition. We’ll begin in September 2019 and proceed with the research icebreaker Polarstern to the Siberian sea ice, which will still be thin at that time of year. Once there, we’ll look for a stable floe to drop anchor on. We’ll then drift along with the floe through the ice of the Central Arctic, which will grow thicker as the winter progresses. One year later, we should have reached the Fram Strait between Greenland and Svalbard. In the course of that year, a total of 600 people will take part in the six cruise legs. 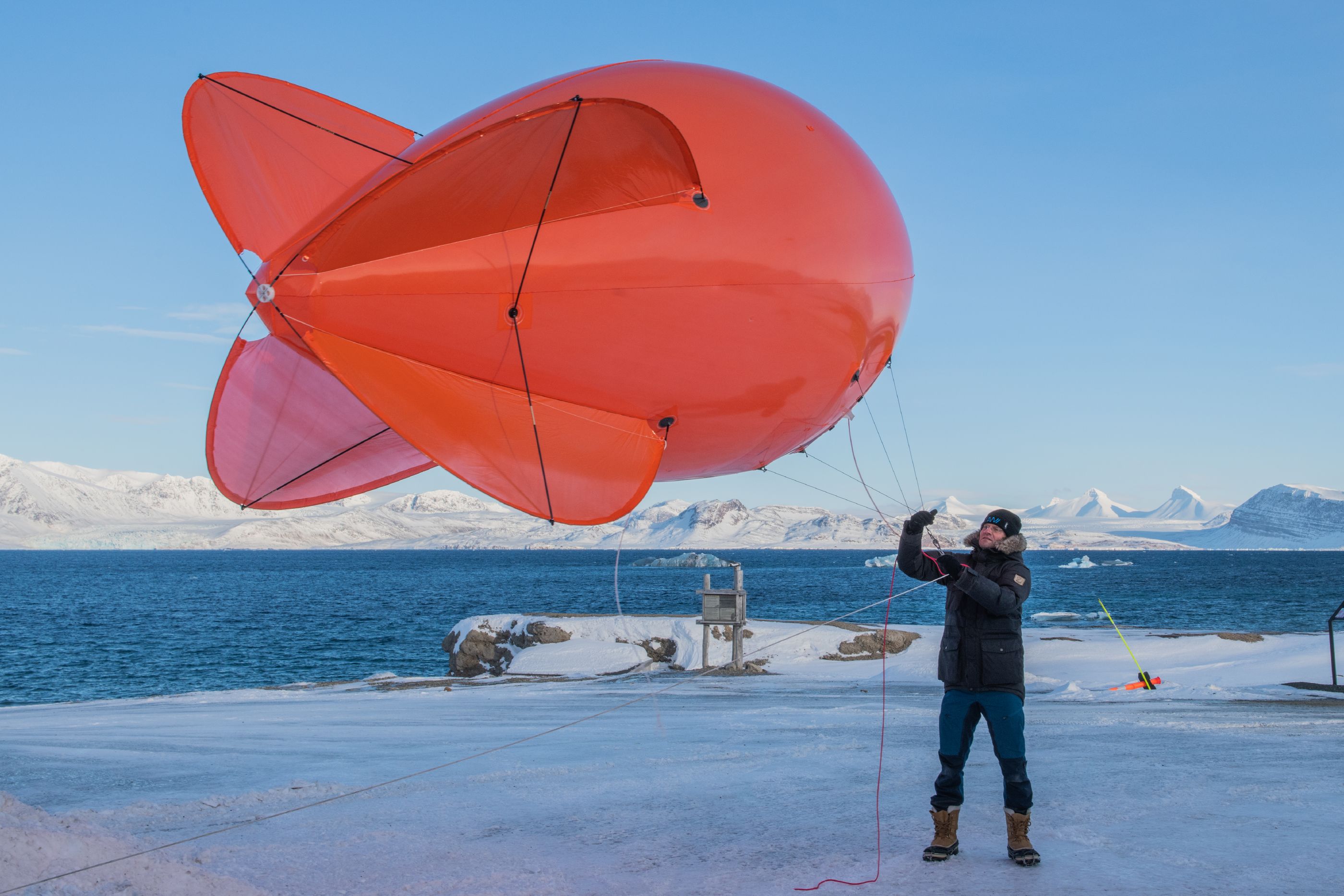 Markus Rex, expedition lead of MOSAiC, with a tethered balloon - 'Miss Piggy' during a MOSAiC field training in Ny-Alesund, Spring 2019.

That sounds like a huge challenge from a logistics standpoint.

To provide suitable logistical support for the expedition, not only Polarstern but also four additional icebreakers are called for. In addition, at least three research aircraft will be involved, some of which will land and refuel at a landing strip prepared on the ice near Polarstern. Thanks to this “filling station at the North Pole”, for the first time the planes will be able to go on extended flight campaigns in the Central Arctic. We’ll also be setting up fuel depots on islands off the coast of Siberia; they’ll serve as bases, allowing Polarstern to be reached by helicopter and expedition members to be evacuated if need be – a contingency plan for medical emergencies on board. Plus we’ll establish an entire network of stations on the ice all around the ship. We’ll visit some of the stations, located within a 50-kilometre radius of Polarstern, by helicopter on a regular basis – and all these aspects are logistical operations that have never before been attempted in this part of the world.

Why hasn’t anyone else attempted a transpolar drift since Nansen’s day?

Except for Nansen, almost no-one has dared to journey to the Central Arctic in winter, or to use the transpolar drift; there have been a handful of small Russian drift camps, which consisted of simple cabins on the ice floes, and the small sailing ship Tara, which was launched by a private organisation and allowed itself to become encased in the ice. But the research capabilities on these small platforms were fairly limited. The MOSAiC expedition will be the first ever to bring a modern research icebreaker and its unparalleled scientific resources to the Central Arctic in winter.

What sets MOSAiC apart from these past expeditions?

Definitely the scale; this is the largest research expedition to the Central Arctic there has ever been. We’re collaborating with more than 60 institutes from 17 countries. The number of participants alone is a wholly new dimension. In addition, there’s never been such a coordinated effort involving five icebreakers, which requires a complex choreography so that we can always be resupplied with fuel and provisions, and exchange staff, at just the right time. Nor has there ever been a comparable deployment of research aircraft in the Central Arctic. Normally our planes simply don’t have the range for extended campaigns. Taken together, these aspects will yield a breakthrough in our understanding of the Arctic climate system. 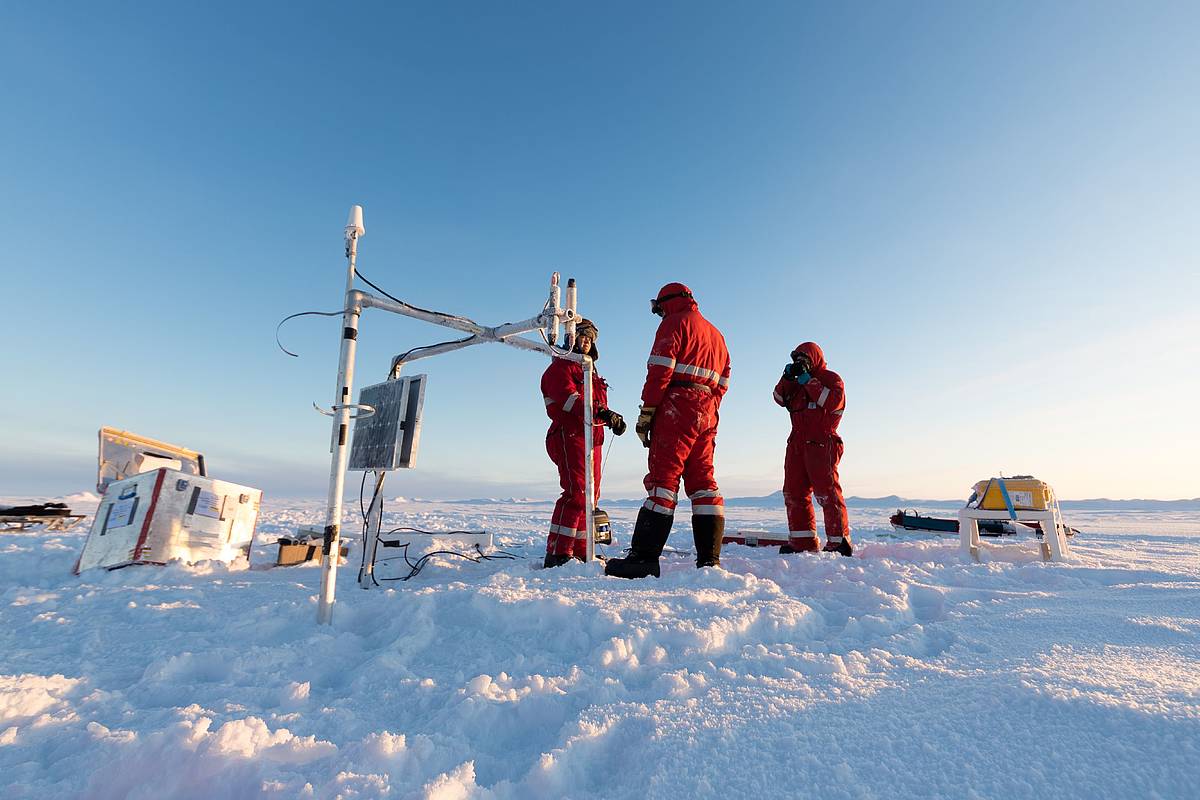 Group of researchers at work on the ice, anchoring of the buoys, for determining of sea ice thickness (center) and the snow thickness (Yellow box, right).

How large is the ice floe that you’ll anchor on?

In short: we’ll be on the lookout for one that is large and stable. The plan is to sail through open water or very thin, fresh sea ice and moor the ship on a massive, older floe. It needs to have a diameter of several kilometres and be at least one-and-a-half metres thick.

How do you prepare for an expedition of this scale?

It feels like we still have about two thousand things left to take care of before we can finally get started. Polarstern will be filled to the brim with equipment. In addition to the containers full of measuring instruments, we’ll also be taking snowcats and new, specially made ice cutters with us, which we’ll use to carve a landing strip out of the ice. We’re going to have to play a bit of Tetris in order to somehow fit it all on board. We’re currently working on concepts to help us do so, and concluding agreements with our logistics partners. Not only that: being on board a research ship that is locked in the ice for so long will be a completely new psychological experience for all of us. It’s important that the team members on board maintain a positive attitude as they drift through the Arctic for thousands of kilometres, surrounded by the cold and dark. But I’m confident that won’t be a real problem; as scientists, we on board live for the fact that each new day brings us new data to work on.

And what about polar bears?

We are of course responsible for protecting anyone who leaves the ship from polar bears. As a result, every group stationed on the ice will also be armed. During the polar night, we can also use infrared imaging to track the bears – which will be a new experience for us, since in previous expeditions we’ve always worked on the sea ice during the day.

Are you worried about these dangers?

Fundamentally speaking, no. We’re taking precautions to minimise the risk for everyone involved in the expedition. We’re developing concepts for all scenarios that we consider to be potentially dangerous, which is also why every point along our course will include evacuation routes. Of course, expeditions to the polar regions, where you’re far from civilisation and help isn’t just around the corner, always contain an element of risk, which can’t be avoided. But all in all, we’re very confident, and the Alfred Wegener Institute has an unmatched track record when it comes to safely organising polar expeditions. In fact, just a few months ago the international polar research community confirmed that we are the only institute in the world capable of coordinating an expedition of this scope.