The logistical plan: resupply on an ice floe 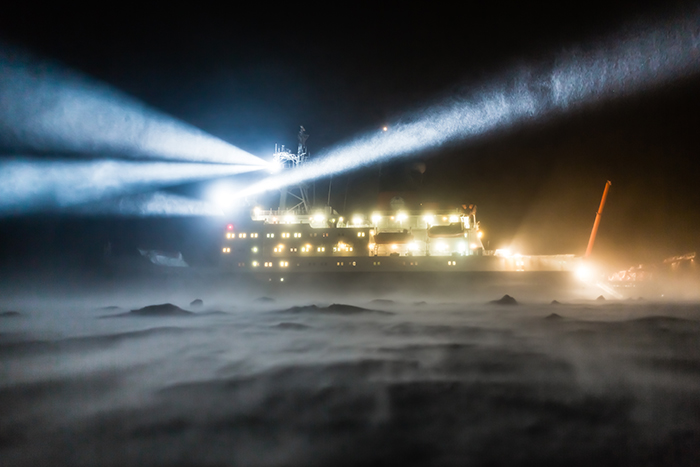 Resupplying the greatest expedition to the Central Arctic of all time has to fulfil two vital criteria: it must be painstakingly choreographed, and at the same time be extremely flexible. After all, during each phase of the expedition, roughly one hundred people will be researching, working and living on board the icebreaker Polarstern and on the surface ice of the Arctic Ocean, and the researchers and crew, together with their gear, will be rotated every two to three months.

In this regard, the logistical planning for MOSAiC has to overcome the challenge of safely and reliably transporting staff and equipment to one of the most remote – and hostile – regions on Earth. Doing so with supply ice breakers is not possible during the near half year-long period from February to June when the ice is too thick to be broken.

Aeroplanes are for the most part infeasible either: the Arctic weather, the long Polar Night or adverse ice conditions often make it impossible to maintain and operate a runway on the ice. And helicopters are not an option during phases of the expedition when the drifting Polarstern is simply too far away even from the specially set up fuel depots on the northernmost Siberian Islands.

And the Arctic ice conditions in the winter and spring can bring even the most powerful icebreakers to their knees. Accordingly, to give MOSAiC the best-possible chance of success, its logistics experts have pursued an approach that is as varied as it is flexible. An indispensable element, despite all of these preparations: having more than one ‘plan B’ ready, so that the expedition’s logistical plan can quickly adapt to every contingency.

A factsheet on MOSAiC sustainability is available as PDF here.

Providing fuel for research, and much more 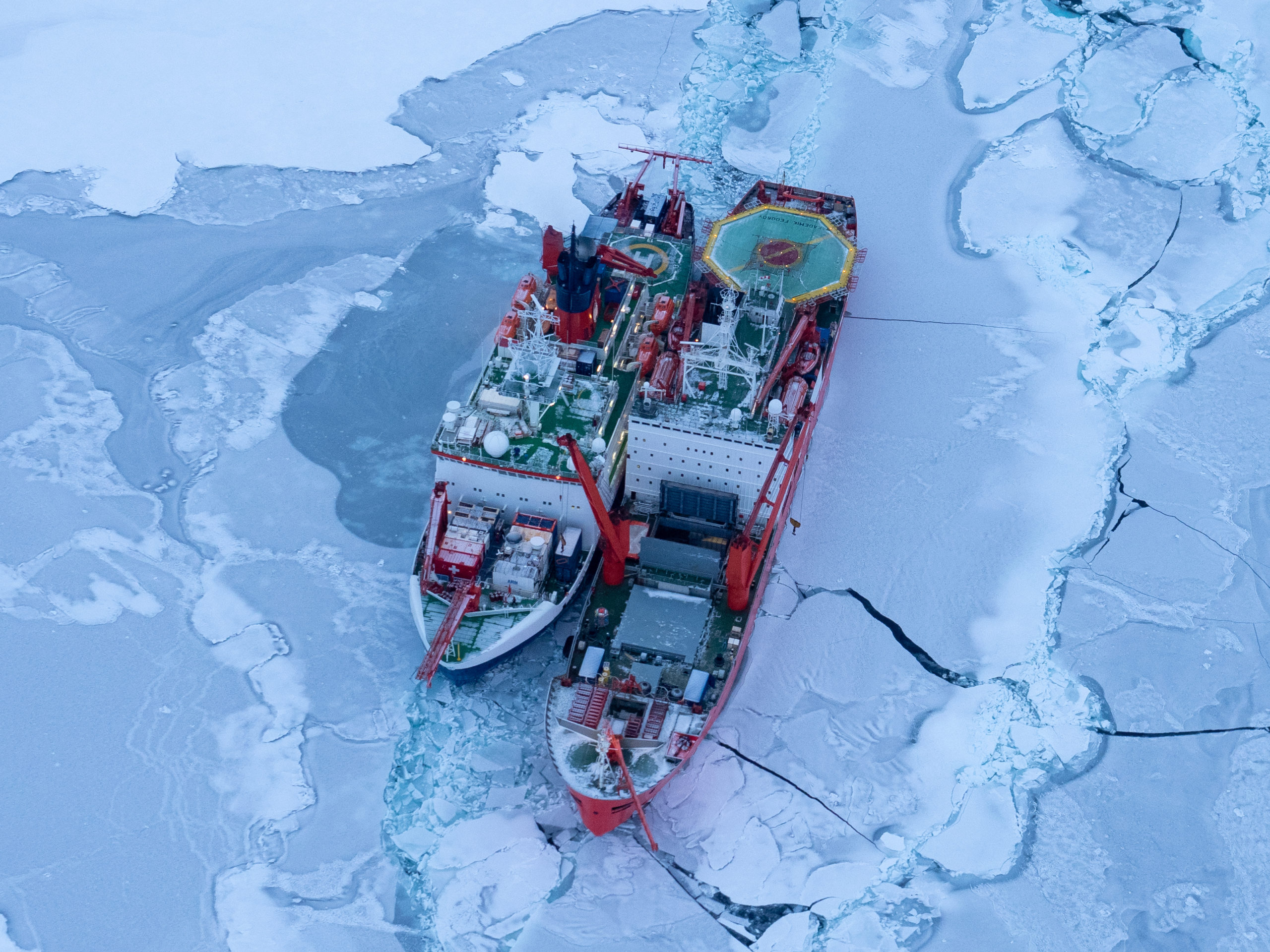 Thankfully, RV Polarstern didn't have to get started on her own: when she departed Tromsø on 20 September 2019, bound north, the flagship of the Alfred Wegener Institute was accompanied by the Russian research vessel Akademik Fedorov. The two ships supported each other when breaking into the ice and further researchers, who helped set up the research infrastructure on site, as well as an international group of 20 young investigators, were on board. And when it came to looking for the ‘perfect’ ice floe, which has the right qualities for the Ice Camp, the two ships were supported by their own helicopters. Later, once Polarstern had anchored at the ice floe, allowed herself to become frozen in the ice, and dispatched her scientific crew to set up the central research stations on the ice, Akademik Fedorov began deploying automatic monitoring stations in a radius of up to 40 kilometres. And throughout the expedition, the researchers will use Polarstern’s two on-board helicopters to visit remote stations from time to time, in order to conduct routine maintenance or retrieve the latest data. The nearby stations and measuring equipment are a different story: the researchers can reach them using one of eight snowmobiles or, to keep emissions to a minimum, on foot.

The fuel for these vehicles, for the helicopters and planned research flights, and above all to keep the icebreaker and the stations on the ice up and running, could be found on board Polarstern and Akademik Fedorov – not to mention all of the expedition equipment, including provisions. Additional fuel will be supplied by the massive Russian icebreaker Kapitan Dranitsyn, which will also make the first and second resupply runs in December 2019 and February 2020, when the ice is still thin enough to break through it; they will involve exchanging the Polarstern crew, the researchers and their gear, and delivering fuel and provisions. On her return journey, Kapitan Dranitsyn will take with her not only crew members, researchers and their gear, but also any waste that isn’t suitable for Polarstern’s special litter-incineration system.

When all else fails 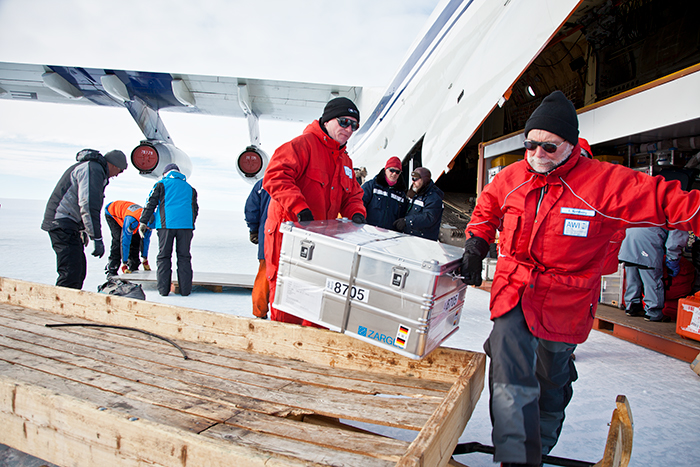 Since the Arctic winter will only just be beginning, in December and tentatively even in February the odds are comparatively good that the Russian icebreaker will be able to reach Polarstern. But with every week after February, more water in the Arctic Ocean will freeze, the ice will become thicker, and the chances of breaking through it will plummet. Consequently, when the planned third crew and staff exchange rolls around, in mid-April 2020, instead of icebreakers, large transport aircraft will bring personnel and cargo to the floe.

These aircraft need not only suitable weather for flying, but also two other things: enough fuel for them to make it back home, which the icebreakers will bring with them on earlier resupply missions; and a landing strip, which will be prepared by the MOSAiC team. In this regard, the team can draw on the lessons learned by Russian researchers: after all, on a much smaller scale than MOSAiC, since 1937 Soviet and later Russian researchers have set up more than 30 small ice-drift stations in the Arctic Ocean, which also had to be resupplied by air. As such, Russia has substantial knowhow on making landing strips on ice floes. 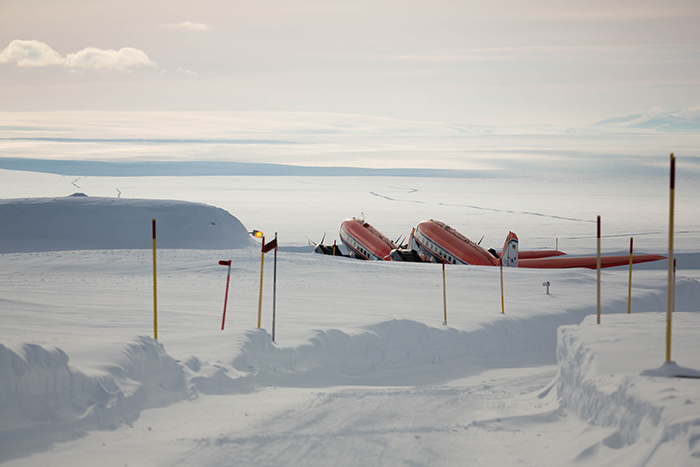 For safety purposes, the landing strip will be built some distance from Polarstern and the ice camp. This will be done using a heavy-duty milling machine that is normally used to prepare new streets and motorways. After being refitted for use in ice, it was mounted on the back of a snowcat. Needless to say, the prototype also had to be tested: it was put through its paces on Gepatsch Glacier at the upper end of the Kaunertal valley in Tyrol, so as to avoid any unpleasant surprises when it will be deployed on the ice of the Arctic Ocean.

To accommodate the Russian Antonov planes that will most likely be used for the crew exchange, the landing strip on the ice should optimally be 1,800 metres long and 42 metres wide, which means the snowcat-mounted milling machine will have plenty of work to do. In some cases, the efforts of the large machines are complemented by manual work with chainsaws and even pickaxes. Afterwards, the snow cat uses a large plough to smooth the landing strip, which will of course also be used by the research aircraft involved in MOSAiC. But the ice landing strip isn’t exactly built to last a lifetime: wind, ocean currents, and tides take their toll on the ice floe, and from time to time a repair team has to be sent to the landing strip. If e.g. a crack has formed, it can be filled with water, which quickly freezes in the Arctic cold and essentially repairs the damage. Nevertheless, the landing strip for the MOSAiC aircraft will only be used in this specific phase of the expedition – after which the ice conditions will make it impossible to safely take off and land. 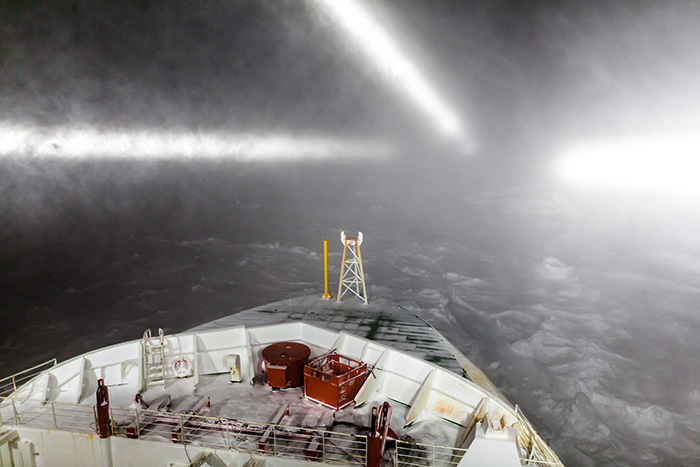 All that’s missing now are the signs and lights that let the pilots know, during the daytime and of course during the Polar Night, where to land and take off from. To guarantee that the signs are clearly recognisable from a distance, and from the air, some have to be several metres long and wide. The problem: such huge signs would take up a great deal of valuable cargo space on the icebreaker. But the MOSAiC logistics experts found an ingenious solution: they hired a sail maker to fashion the large signs for the MOSAiC landing strip from the tarp used on commercial curtainside trucks, allowing them to be folded for compact transport. In addition, just like any normal airport, the aircraft warning lights required for international air traffic will also need to be installed on the ice floe. The reason: if the resupply ship Kapitan Dranitsyn is unable to reach Polarstern in February 2020, aeroplanes will have to take its place, and during the Polar Night they can’t possibly take off or land without lights. 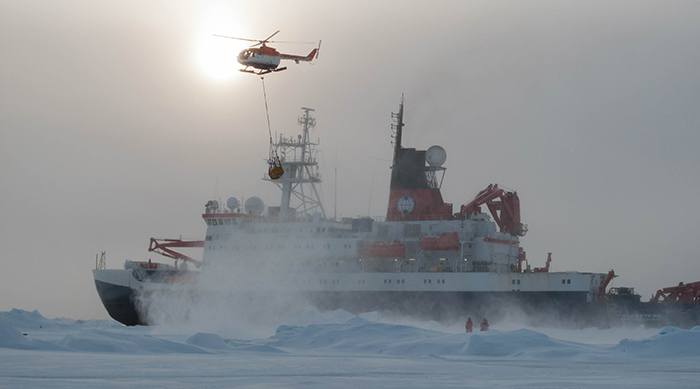 In the event that the landing strip plan proves infeasible, long-range helicopters represent an alternative means of transporting researchers, crew, equipment and supplies to the station. Yet this plan B has a number of disadvantages – which makes it clear why the MOSAiC planners were willing to invest so much effort in making a landing strip to begin with: compared to aeroplanes, long-range helicopters consume significantly more fuel to transport the same amount of weight, which greatly limits their range.

Nevertheless, it must be ensured that this plan B can be put into action if necessary: consequently, to guarantee that the ice station could be resupplied, and that researchers and crew could be rotated in and out, prior to the start of the expedition fuel depots were installed on islands located as far north of the Siberian coast as possible. Since it’s impossible to predict Polarstern’s drift route with absolute certainty, several of these depots, where helicopters can touch down and refuel, were set up.

In the unlikely event that this resupply option also fails because Polarstern is out of range from the fuel depots or the weather does not allow these complex airlift operations, when she leaves port Polarstern will have sufficient fuel, provisions and equipment on board to keep her running through June 2020 without any external support. And potable water isn’t a problem, since the ship’s own systems can harness it from seawater. Moreover, by June the Polar Night will be long over, which means the ice will become thinner – and support icebreakers will then be able to reach Polarstern in her drifting prison.

Icebreakers from Sweden and China 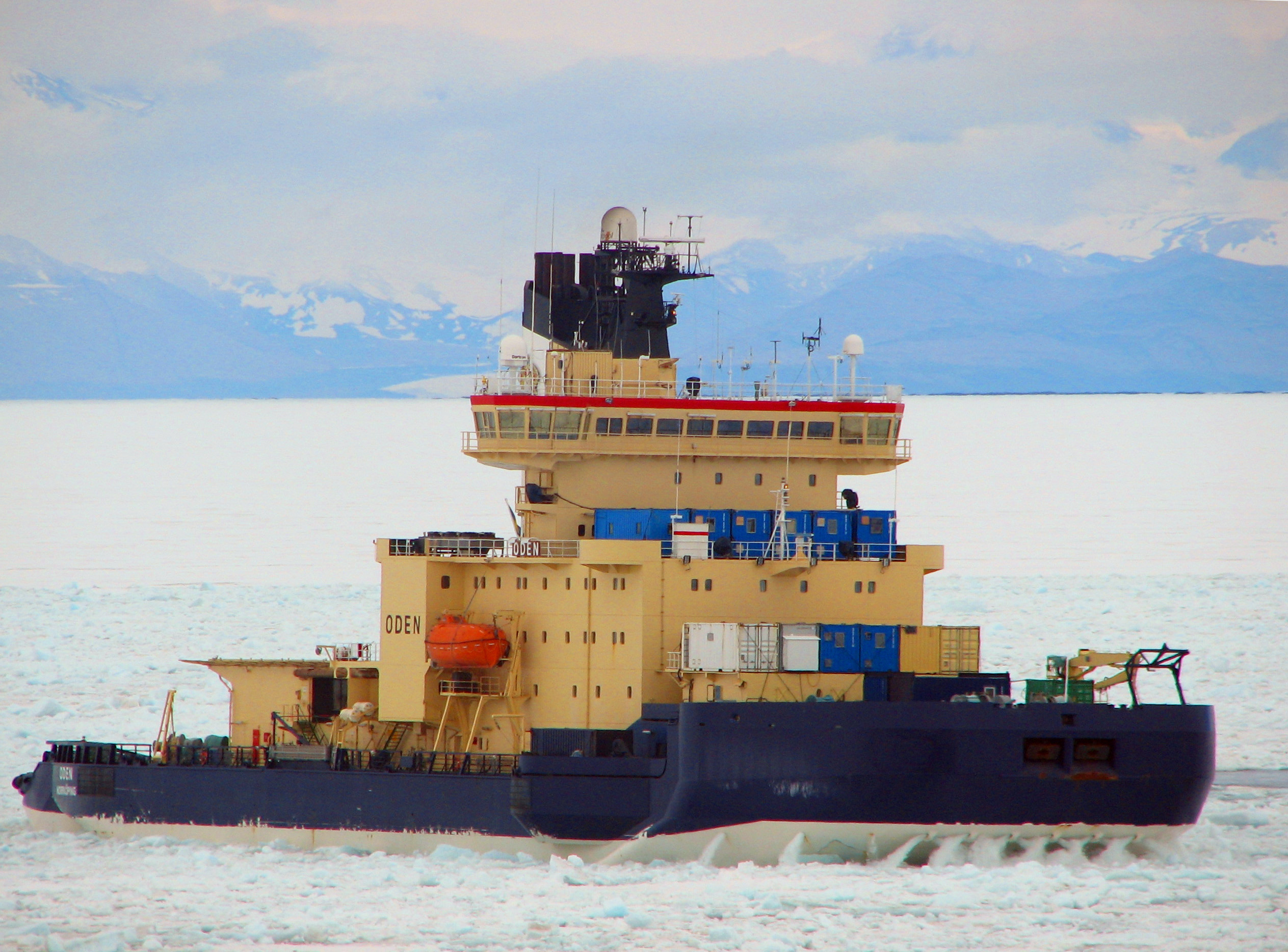 The first visit of a vessel after the long phase of isolation is scheduled for mid-June 2020, when the Swedish research icebreaker Oden will traverse the thinning ice to bring Polarstern new researchers and supplies. And not just once: since Oden is much smaller than e.g. Kapitan Dranitsyn, the icebreaker will pay Polarstern another visit in mid-July.

In mid-August the brand-new Chinese icebreaker Xue Long 2 will follow suit, with a new crew, new group of researchers, equipment and much more on board. And when they depart again, Xue Long 2 and Oden will not only take researchers, crew and litter with them, but also any equipment that is no longer needed.

The end of the northernmost city on Earth 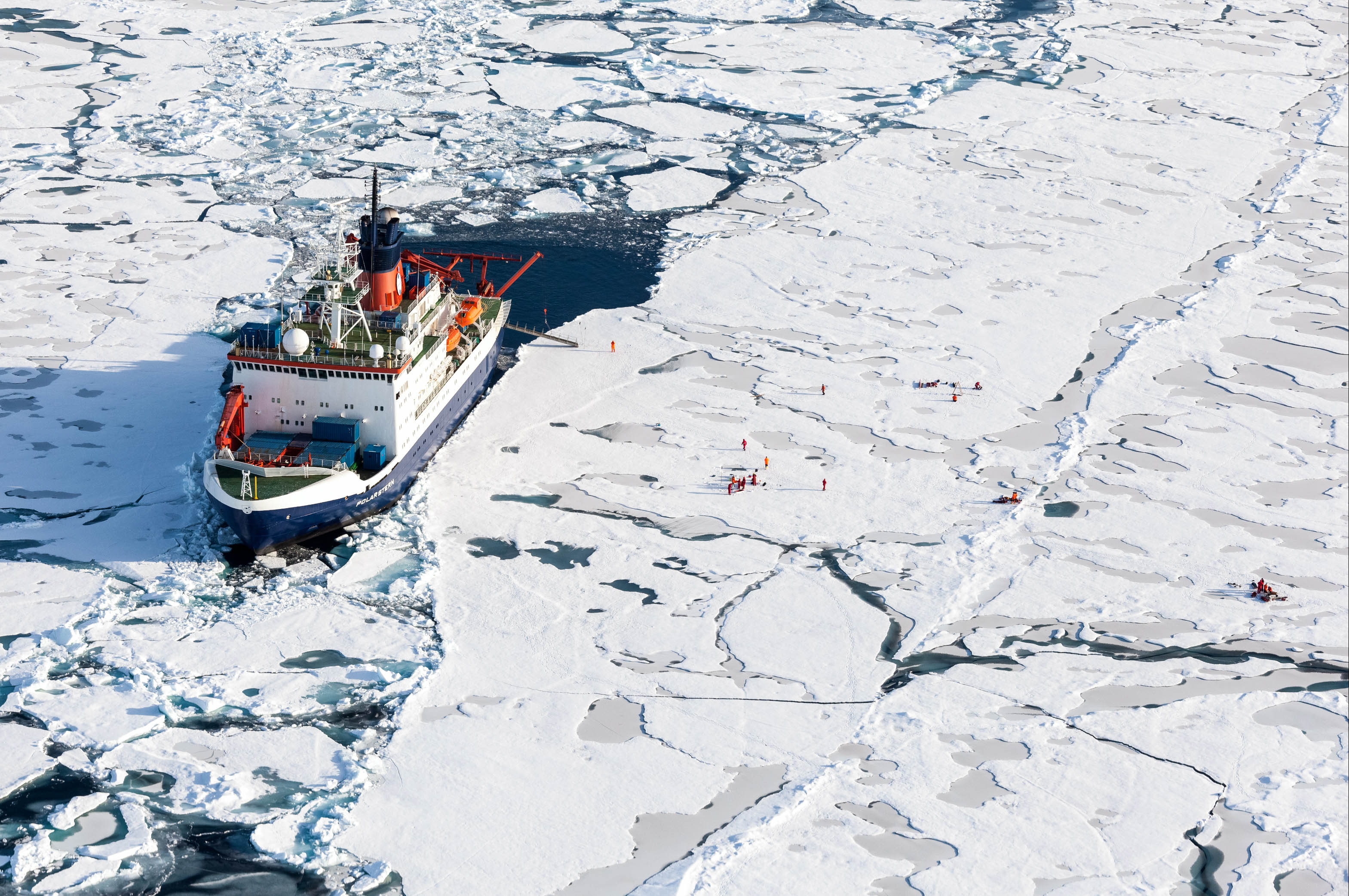 By September the ice cover on the Arctic Ocean will have reached its minimum, the floes will be at their thinnest, and the greatest expedition to the Central Arctic of all time will slowly draw to a close. The last team of researchers will attend to gathering up all of the equipment and taking down the Ice Camp, which, for almost a year, was the northernmost ‘city’ on Earth. Then Polarstern will begin her return journey. The experts participating in the expedition hope to leave behind as few traces of their presence in the Arctic Ocean as possible – and an indelible mark in the history of Arctic research. 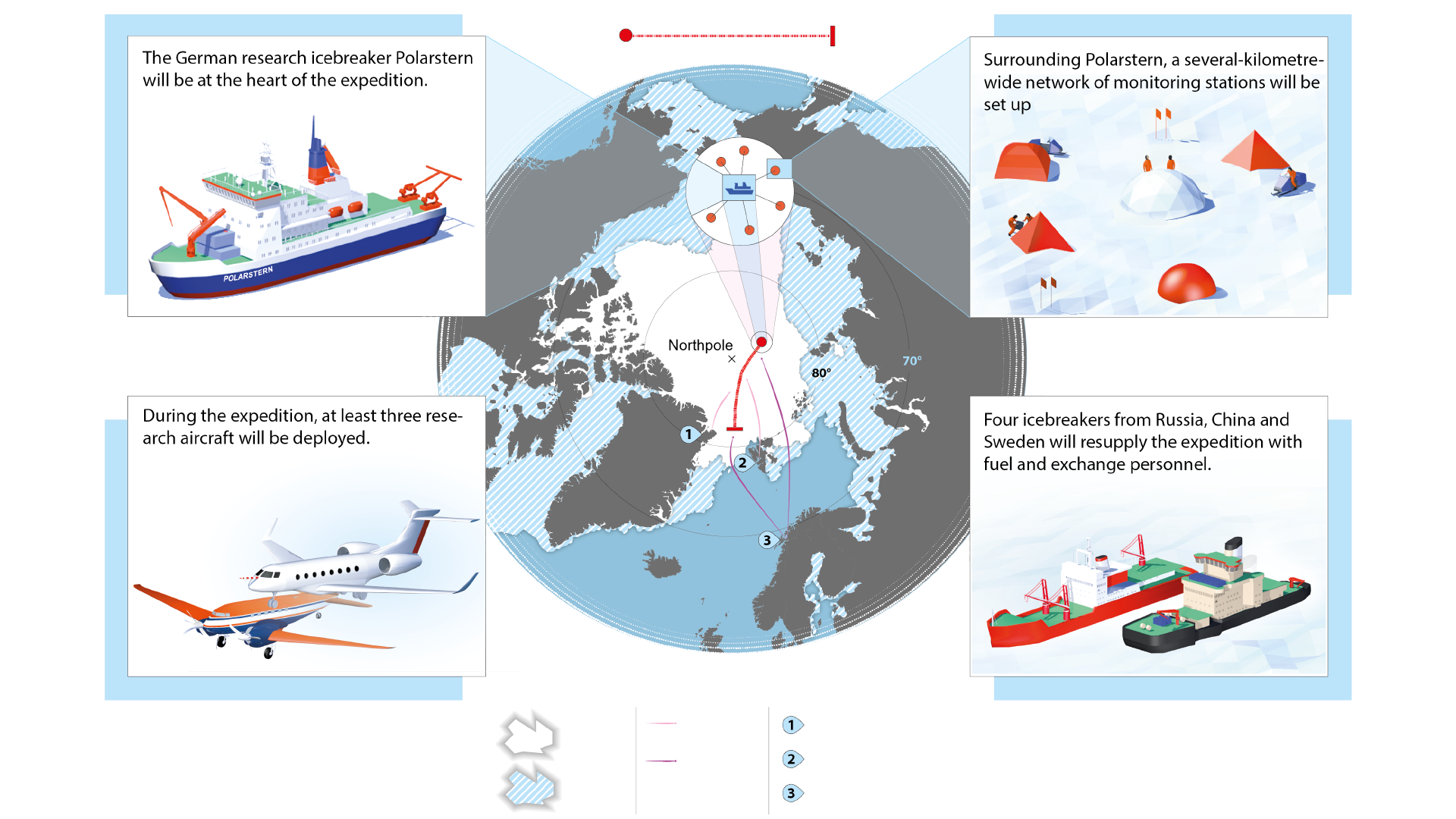